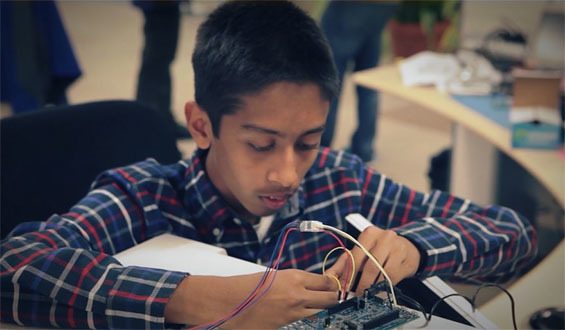 A 15-year-old from Oregon, Shahir Rahman, has invented a “smart microwave” that will detect the foods to be heated and adjust itself accordingly to cook to each one.

Shahir was inspired when his father’s tea boiled over, and he wondered why no one had taken care of the problem. He said:

If you look at current-day heating applications, there’s different kinds — for comfort, for warming the house, for cooking — but the cooking part hasn’t become smart. This is something that I wanted to change. I wanted to improve cooking, prevent burns, and create better food.

Then he began dissecting microwaves to figure out how they work, studying the texture of various foods and how it affects their cooking temperatures, and taking a temperature gun to finished meals at his home and at restaurants, writes Megan Treacy of Treehugger.

He found that low-viscosity foods like soup should be hotter when they’re taken out of the microwave, whereas thick foods like rice should be cooler to prevent burning the consumer.

By looking at the viscosity, I was able to determine mathematically what temperature the food needed to reach so that it was lip-ready and the person could eat right away.

He realized that microwave’s turntables address hot and cold spots within the appliance, which he could exploit so that some foods would be heated and others wouldn’t. For example, he wanted to be able to heat mashed potatoes, but not the salad on the same plate. He studied microwave heating patterns by removing the turntable and heating shredded cheese on a plate and observing how much the cheese in each area melted.

Then, Shahir began creating algorithms. He used Excel, but found it inadequate for his needs and switched to Python.

My real journey began when I started learning Python.

At this point, his father Asifur Rahman and his coworkers in the New Devices and Internet of Things groups at Intel stepped in to help, according to Phys.org.

The reason Shahir is so successful is that he doesn’t know what he doesn’t know, so he just tries everything. That’s so refreshing. It’s incredible to see a young man accomplish so much with a positive attitude and passion.

The microwave that Shahir made uses a single Panasonic thermopile array sensor, reports Nick Schmiedicker of Reviewed, which identifies the food and uses Shahir’s algorithms to calculate its perfect temperature and the time it will take to get there. The remaining time and the microwave’s cook temperature are displayed for the user with a smartphone app.

In the future, Shahir hopes to make changes to the microwave like adding the ability to detect possible fires and to identify the food inside without any help from the user:

My goal is to eventually create a device that could warm up food without any user input.

Shahir hopes to attend a STEM-focused college in California so that he can follow in the footsteps of his parents, who are both engineers at Intel.