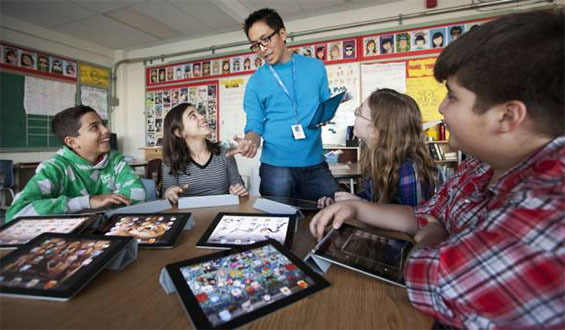 Apple recently previewed a new update to its iOS, revealing a significant change for education with new features specifically for classroom use, including the ability to set up profiles for each student that will be available from any school iPad.

The update for iOS 9.3 offers multiple new ways to sign into Apple iPads, as well as an easy way to share devices across multiple students. Each student on the shared device will still be able to have an individualized experience.

Logins will be simplified for younger students as well, as teachers will be able to input student photos so all they need to do is touch their photo to log in. When a student logs back in, the iPad will help them to pick up where they left off.

In addition, school administrators will benefit from Apple School Manager, allowing for a centralized management system for all iPads in use, as well as the ability to centrally manage Apple IDs, reports Lance Ulanoff for Mashable.

Teachers will be able to use a new Classroom app to monitor student work. They will also be able to pass out student work, including quizzes, to all iPads in their classroom at one time as well as to cast student work onto a TV that is connected to Apple TV from their iPad.

While schools will need to install Apple hardware before they will be able to fully take advantage of all the new tools, Apple CEO Tim Cook said the company is working to help with that as well.

“What we’re trying to do is facilitate that… we selected 120 schools around the U.S. that are the most needy schools… and we’re working personally with them not just to bring in products, but bring in our people there, as well, to help teachers,” said Cook.

Cook took part in an Apple Store Hour of Code program in New York City alongside students from a local elementary school. Each participant used an iPad mini that was running Code.org’s coding course.

The new efforts show how Apple is making a push to get ahead of Google, who is becoming increasingly more popular among school districts, with many of them currently using Google Apps for Education, including Gmail, Google docs, and in many cases, adopting the less-expensive Chromebooks.

Chromebooks have gone beyond the 51% mark in the US K-12 market for the first time, suggesting schools are making technology purchases in bulk and using more online exams, putting the emphasis onto low-cost, easy-to-maintain devices.

While Chromebooks’ market share has increased to 51% from 40%, Apple products, including iPads, laptops and desktop computers, have declined from 32% to 24%. Meanwhile, Windows-based machines have remained constant at 23%, writes Jon Swartz for USA Today.

Recent data suggests that although iPads appear to be useful educational tools, teachers seem to like them less, arguing that students find ways to use them to waste classroom time on social media such as Facebook and Instagram.